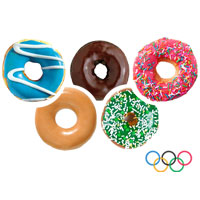 The thrill of victory! Like when your omelet is cooked perfectly. The agony of defeat! Like when there's not enough pancakes. One thing we all (visiting this site) seem to have in common with our U.S. Olympic Team is a big appreciation of breakfast.

If you consider the first meal of the day to be the best, then these amazing athletes have already won GOLD. Which is terrific, because many of them won't get an actual medal. But some will! Here's what your favorite Olympic athletes eat for breakfast: 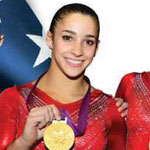 Aly Raisman (Gymnastics)
On training days, Aly will usually have 2 slices of whole wheat toast with jelly. Occasionally, she'll have a bowl of cereal with skim milk. Her drink of choice is hot water with lemon. On days that she's not training, she might have an egg white omelet with healthy ingredients like spinach, tomato and salmon. (Source: Cosmopolitan.com) 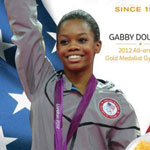 Gabby Douglas (Gymnastics)
When training, Gabby is likely to start her day with oatmeal and a banana. As for beverages, she downs a glass of water right before breakfast and tends to have tea with the meal. On her days off, her breakfasts are little more indulgent consisting of things like waffles, bacon and scrambled eggs with cheese. (Source: Self.com) 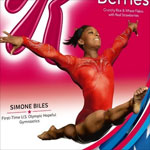 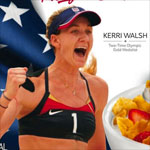 Kerri Walsh Jennings (Beach Volleyball)
In 2016, her typical breakfast during training was lemon water with apple cider vinegar and chia followed by a protein shake (Source: WellAndGood.com). The previous year, Kerri told People Magazine, "I'm a huge advocate of a big breakfast" and she noted that her typical family breakfast consisted of waffles with almond butter and honey on it, a protein shake made of greens, eggs or oatmeal with almond butter and honey. 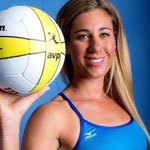 April Ross (Beach Volleyball)
April follows a vegetarian, plant-based diet except when she is really craving meat. Her typical breakfast, as she told People Magazine, is steel cut oatmeal made with almond milk and mixed with dates, a banana, walnuts and maca powder. Maca is a root in the radish family that's supposed to increase stamina, mental focus and sexual libido. Her official website says that greek yogurt with berries, dates, and nuts is another go-to breakfast. She allows herself pancakes on Sunday if she's eaten healthy throughout the week. 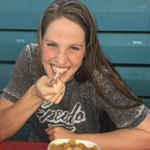 Missy Franklin (Swimming)
Missy has described herself as a "huge breakfast person." She "almost always make(s) omelets". Flipping omelets in the pan is a skill she's very proud of. She likes to pair her omelets with nutrition-rich foods like fruit and whole-wheat toast. (Source: People Magazine) 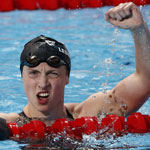 Katie Ledecky (Swimming)
According to refinery29.com, Katie Ledecky likes bacon, cheese and tomato omelettes paired with hash browns and bagels. A profile in Vogue noted how her dad would place an order for her breakfast at a local deli during Katie's early morning practice. That order was also an omelet. 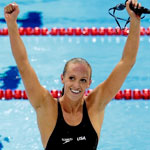 Dana Vollmer (Swimming)
Due to food allergies, Dana follows an egg-free and gluten-free diet. According to her Twitter, her power breakfast is a combination of brown rice, natural peanut butter, banana slices, blackberries, sunflower seeds and a drizzle of maple syrup. 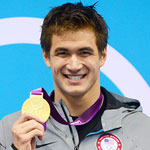 Nathan Adrian (Swimming)
Nathan eats breakfast twice during practice days: 1) oatmeal and a scoop of protein powder before morning practice; and 2) three eggs, two pieces of toast and an avocado right after practice. He was quoted as saying "One breakfast burrito alone isn't enough... That's why I got a breakfast burrito and an omelet." (Source: US Weekly) 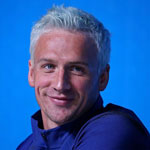 Ryan Lochte (Swimming)
As part of his 7,000 to 8,000 calorie per day diet (seriously), Ryan starts his day with a scramble of 5 or 6 eggs mixed with spinach, tomatoes and ham. Plus... breakfast potatoes. Plus... pancakes. Plus... oatmeal and fruit. His wake-up drink is French vanilla coffee with milk and sugar. (Source: Bon Appetit) 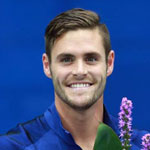 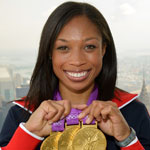 Allyson Felix (Track & Field)
Allyson's go-to breakfast is oatmeal, plain except for some milk and sugar. On competition days, she also adds extra carbs and protein, like a whole wheat bagel with some chicken sausage. She's said that the biggest key to keeping her energy up is "making sure (she) eat(s) a good breakfast." (Sources: Stack.com and Health.com) 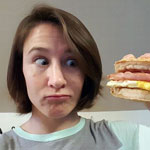 Marti Malloy (Judo)
Marti told espnW.com, "I am a huge fan of breakfast at any time of day." That site profiled the breakfast she was eating at that moment. It was a fried egg, deli ham and cheese sandwiched between two blueberry waffles. You can find the recipe here. 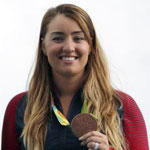 Corey Cogdell (Shooting)
Corey once posted on Instagram that her normal breakfast is a protein shake, supplements and protein packed banana bread. We also know she loves pancakes. She posted her homemade Oatmeal Protein Pancakes on Instagram with the comment "Fueling up... for a good day on the range!" You can find the recipe here. We also know that she once ate a pancake sampler platter at Nashville's Pancake Pantry. 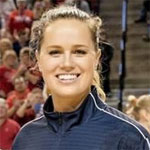 Kelsey Robinson (Indoor Volleyball)
Kelsey told the website nataliehagglund.com that her favorite type of food is Mexican and that she makes a "mean breakfast bowl." That might lead one to believe she makes a mean Mexican breakfast bowl. Not so fast. In April 2013, she posted a picture of a fruit-based breakfast bowl (with bananas and shredded coconut) with the caption "Sunday morning breakfast #fakeacaibowl #nomnom #paleoversion." We don't know the recipe for her fake acai bowl. But here's a recipe for a #real Acai Breakfast Bowl. In related news, she once told the website medium.com, "I love brunch."