Slideshow of images uploaded for Cheerios from General Mills

Return to the main page for Cheerios
◀ PREVIOUS
NEXT ▶ 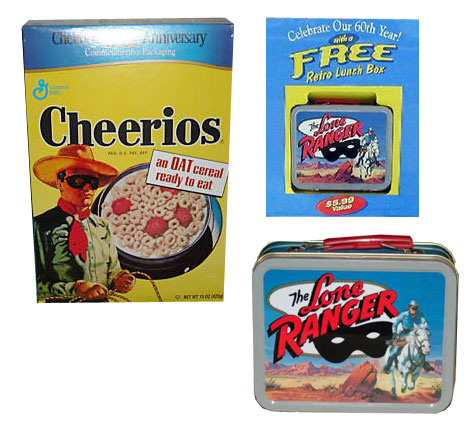 This is a special Cheerios box that came out in 2001 to celebrate Cheerios' 60th anniversary along with the send-away lunch box premium. The lunch box has this text on one end: ""A fiery horse with the speed of light, a cloud of dust, and a hearty Hi-Yo Silver Away! Return with us not to those thrilling days of yesterday. . .The Lone Ranger rides again!" The other end reads, "In 1941 Cheeiors was introduced as America's 1st ready-to-eat oat cereal. In our early years, we developed a strong relationship with a true American hero: The Lone Ranger. In 2001, Cheerios is proud to celebrate our 60th anniversary and our partnership with the Lone Ranger with this commemorative tin." All in all, pretty sweet.