Slideshow of images uploaded for Atlantis from Kellogg's

Return to the main page for Atlantis
◀ PREVIOUS 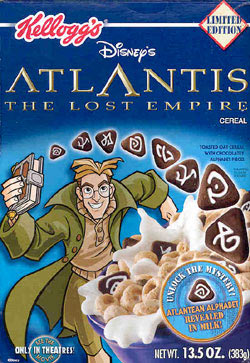 The box for this cereal featured the animated Disney character Milo. On the bottom of the box, it said "unlock the mystery - Atlantean alphabet revealed in milk."

That makes me think the letters on the cereal pieces only appeared when exposed to liquid, but I don't have any first-hand experience to back that up.