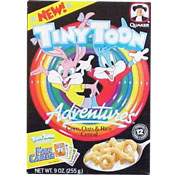 From: Quaker
Introduced in 1990


A corn, rice & oats cereal shaped like the various letters required to spell "tiny toon". This cereal was a tie-in with the animated television series Steven Spielberg Presents Tiny Toon Adventures which ran from 1990 to 1995.

Company Description: The Quaker Oats Company was founded in 1901 with the merger of three oat milling operations in the Mid-Western United States. Since then, the company has expanded operations to include a number of grocery sectors. In addition to hot and cold breakfast cereals, their products include... Read on and see all cereals from Quaker
This cereal belongs to the following Mr Breakfast Cereal Families:
Tiny Toon Adventures Cereal Theater

Submitter: Mr Breakfast
Uploaded: 11/13/2008
Additional details
Upload an image for this cereal
Comments About This Cereal
What do you think of Tiny Toon Adventures?
By Steve-Os

Sounds like I didn't miss out on these. I used to watch the cartoon all of the time. I'm surprised they made it a bland cereal based off of a kid's show.

I loved the cartoon show, but the cereal just tasted like generic Alpha-bits to me... not great and not bad.