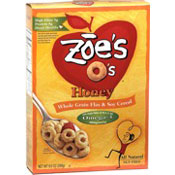 
This was one of three cereals in the Zoe's O's family. The other two were Zoe's Natural O's and Zoe's Cinnamon O's.

As you've probably determined from the name and the picture to the right, this was an O-shaped cereal that was sweetened with honey. What you might not know is that it was loaded with healthy omega-3 fatty acids thanks to ground flaxseeds in the ingredients.

This cereal has been discontinued. You may have already realized that because I used the word "was" instead of "is" in the first two paragraphs. If you didn't, I'm sorry for shocking you with such a blunt sentence at the start of the third paragraph.

Company Description: Zoe Foods specialized in breakfast cereal and granolas that were high in flax, soy and whole grains. The following description was from their website when it still existed in 2009... Read on and see all cereals from Zoe Foods

Upload an image for this cereal
Comments About This Cereal
What do you think of Zoe's O's: Honey?
There are no comments yet for this cereal. Be the first! Was it good? Was it bad?
Do you have information not included in the article? Let the world know!