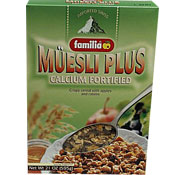 
This calcium-fortified cereal distinctively had the word "plus" in its name. Other boxes of their Muesli (usually called Swiss Muesli) had a plus symbol next to the word Muesli, prompting us to think that their regular muesli (with the plus symbol) might be the same as this cereal, Muesli Plus.

Company Description: The Familia Company is based in Sachsein Switzerland where they have been been a leading producer of authentic Swiss Muesli for almost 50 years. They describe themselves as "the premier cereal maker in Switzerland" and "expert at blending the finest cereal grains with... Read on and see all cereals from Familia

Upload an image for this cereal
Comments About This Cereal
What do you think of Muesli Plus?
There are no comments yet for this cereal. Be the first! Was it good? Was it bad?
Do you have information not included in the article? Let the world know!