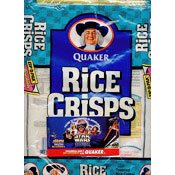 
This was Bagged Cereal from Quaker that was described on the bag simply as a Toasted Rice Cereal. The bag itself was called a Zip-Pack and was resealable for freshness.

In 1999, some packages included a Star Wars Phantom Menace card attached right to the bag.

Upload an image for this cereal
Comments About This Cereal
What do you think of Rice Crisps?
There are no comments yet for this cereal. Be the first! Was it good? Was it bad?
Do you have information not included in the article? Let the world know!