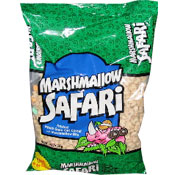 From: Quaker
Introduced in 1996


A bagged cereal from Quaker. The cereal pieces came in the following shapes/colors: an orange rhino, a red and yellow snake, a purple and white gorilla, a green crocodile, a light green turtle, an orange and yellow bird, a yellow banana and a blue and yellow jeep.

Company Description: The Quaker Oats Company was founded in 1901 with the merger of three oat milling operations in the Mid-Western United States. Since then, the company has expanded operations to include a number of grocery sectors. In addition to hot and cold breakfast cereals, their products include... Read on and see all cereals from Quaker
This cereal belongs to the following Mr Breakfast Cereal Families:
Upload an image for this cereal
Comments About This Cereal
What do you think of Marshmallow Safari?

This was one of my favorite morning cereals. I would be overjoyed if it made a return.

I absolutely LOVED this cereal! And, I was devastated when they stopped producing it. Nothing comes close to Marshmallow Safari!

Love them! The Quaker version is great! The Malt-O-Meal version is disgusting!

I've been searching high and low for this cereal since it was removed from the grocery aisles about 7 years ago. The best thing a kid could ask for, for Christmas, would be for its timely return. Looking for a miracle!

This cereal was awesome! Everything you liked about Lucky Charms but with a better tasting cereal bit!