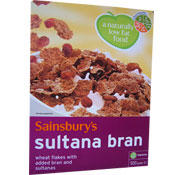 
This cereal has been described on the box as "wheat flakes with added bran and sultanas... a naturally low fat food."

A sultana is a kind a grape which provides the raisins in this cereal.

Sainsbury's is a major supermarket chain and online retailer in the U.K.

Company Description: The company classification of "Independent / Undefined" is a catch-all for several cereals in our database. This category includes 1) cereals from smaller companies with a near-national distribution; 2) cereals whose manufacturer we've been unable to determine; and 3)... Read on and see all cereals from Independent / Undefined
This cereal belongs to the following Mr Breakfast Cereal Families:
Upload an image for this cereal
Comments About This Cereal
What do you think of Sultana Bran (Sainsbury's)?
There are no comments yet for this cereal. Be the first! Was it good? Was it bad?
Do you have information not included in the article? Let the world know!