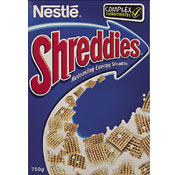 
Shreddies is major brand knockoff of Wheat Chex, the classic cereal originally produced by Ralston in 1937 and currently produced by General Mills. Anyone who knows anything knows the familiar checkered, interwoven pattern of Chex cereal and its countless imitators.

In the U.S., Shreddies is produced by Post. The very first producer of Shreddies was Nabisco.

Upload an image for this cereal
Comments About This Cereal
What do you think of Shreddies (Nestle)?

No, shreddies are originally a Canadian cereal produced for that market. To say they are a "knock off" is like saying that Coke is a "Knock off" of Pepsi. Or that would be Pepsi of Coke as coke came first. Do some research. Shreddies are sweeter than Chex, and are also less crunchy. They are quite different in taste and texture.