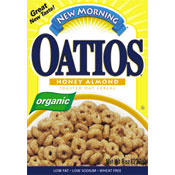 
This cereal appeared to be New Morning's version of General Mill's Honey Nut Cheerios. The box described it as an "organic toasted oat cereal" that was "low fat... low sodium... (and) wheat free."

Company Description: New Morning is a brand of U.S. Mills. In addition to their line of cereals, New Morning also produces graham crackers and cookies. The brand was started in 1978 by a farmer in Ashburnham, Massachusetts.... Read on and see all cereals from New Morning

Upload an image for this cereal
Comments About This Cereal
What do you think of Honey Almond Oatios?
There are no comments yet for this cereal. Be the first! Was it good? Was it bad?
Do you have information not included in the article? Let the world know!