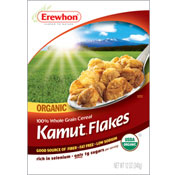 Selenium is a micronutrient which acts as an antioxidant when absorbed by the body.

Kamut is an "ancient grain", a cousin of wheat that's larger, higher in protein and often considered to have a nuttier flavor than traditional wheat. (And by "nutty", I don't mean weird. I mean warm, rich and flavorful.)

Upload an image for this cereal
Comments About This Cereal
What do you think of Kamut Flakes (Erewhon)?
There are no comments yet for this cereal. Be the first! Was it good? Was it bad?
Do you have information not included in the article? Let the world know!