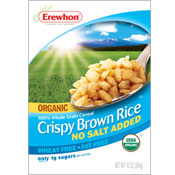 
This is Erewhon's Original Crispy Rice formulated with no salt. It's an organic, 100% whole grain cereal that's wheat-free and fat-free. One serving has less than a single gram of sugar.

An examination of old cereal boxes seems to indicate that the the most original of their Original Crispy Cereal was originally formulated with no salt. That means this cereal may be closer to the Original than the version they sell that's not labeled, "no salt added."

Upload an image for this cereal
Comments About This Cereal
What do you think of Crispy Brown Rice - No Salt Added?
There are no comments yet for this cereal. Be the first! Was it good? Was it bad?
Do you have information not included in the article? Let the world know!