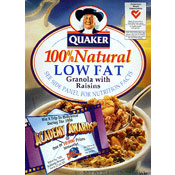 
This cereal eventually became Quaker Natural Granola Lowfat With Raisins with "100%" dropped from the name.

When it was produced with "100%" in the name, the box touted that it had "0 grams trans fat." The first five ingredients listed on the side panel were wholegrain rolled oats, wholegrain rolled wheat, sugar, raisins and crisp rice.

Upload an image for this cereal
Comments About This Cereal
What do you think of 100% Natural Granola: Low Fat With Raisins?
There are no comments yet for this cereal. Be the first! Was it good? Was it bad?
Do you have information not included in the article? Let the world know!