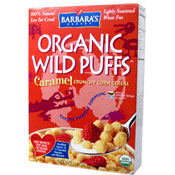 
A 2004 ad titled "Go Wild!" described this cereal like this: "Organic Wild Puffs Caramel are tasty wheat-free puffs of organic-corn packed with mouth-watering caramel flavor and a distinctive crunch." The ad went on to explain how Babara's Bakery would donates a portion of the sales of the cereal to the National Wildlife Refuge Association.

Upload an image for this cereal
Comments About This Cereal
What do you think of Organic Wild Puffs - Caramel?
There are no comments yet for this cereal. Be the first! Was it good? Was it bad?
Do you have information not included in the article? Let the world know!