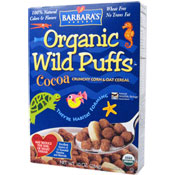 
This cereal was comprised of chocolate puffs of oat and corn. It was wheat-free, cholesterol-free, low-fat and organic. It resembled Cocoa Puffs cereal in appearance, texture and taste. This cereal is now discontinued, but don't fret... Barbara's Bakery went on to give us Crunchy Cocoa Organic Wild Puffs, a cereal that is "wildly" similar.

Company Description: According to the brand's website, Barbara's Bakery started in 1971 when a 17-year-old girl named Barbara opened a small organic bakery in Northern California. The bakery transformed from a storefront operation to a wholesale business. In 1986, Barbara's Bakery was acquired... Read on and see all cereals from Barbara's Bakery
This cereal belongs to the following Mr Breakfast Cereal Families:
Upload an image for this cereal
Comments About This Cereal
What do you think of Organic Wild Puffs - Cocoa?
There are no comments yet for this cereal. Be the first! Was it good? Was it bad?
Do you have information not included in the article? Let the world know!