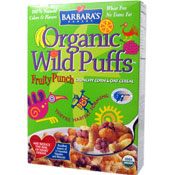 
This cereal was described on the box as a "crunchy corn & oat cereal" that had the following attributes: "100% natural colors & flavors... wheat free... no trans fat." The box also warned, "They're habitat forming" - a nod to a promotion with the National Wildlife Refuge Association.

The cereal pieces were particularly fun: yellow bananas, orange oranges and purple grape clusters. Not only did it taste fruity, it looked super fruity.

Upload an image for this cereal
Comments About This Cereal
What do you think of Organic Wild Puffs - Fruity Punch?
There are no comments yet for this cereal. Be the first! Was it good? Was it bad?
Do you have information not included in the article? Let the world know!