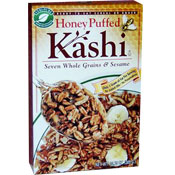 
This cereal was described on the box as being made of "seven whole grains & sesame."

A Kashi media kit gave this description: "Honey Puffed Kashi is a favorite for those who like a sweet cereal or snack. Unlike other honey puffed cereals, Honey Puffed Kashi has no oil added, so it has only 1 gram of fat per serving, plus the slightly toasty sweet flavor of real honey."

Upload an image for this cereal
Comments About This Cereal
What do you think of Honey Puffed Kashi?
There are no comments yet for this cereal. Be the first! Was it good? Was it bad?
Do you have information not included in the article? Let the world know!