Xena: A Taste of Honey 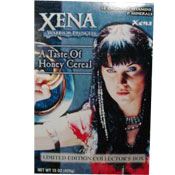 From: Independent / Undefined
Introduced in 2001


This limited-edition cereal was introduced by Rittenhouse Archives (in association with scifihobby.com) in September of 2001. The cereal was available exclusively in comic and collectible shops and never appeared in grocery stores.

Three versions of the box were produced each featuring one of three characters from the television series Xena: Warrior Princess: Xena, Gabrielle and Callisto.

The back of each box contained 4 cut-out trading cards (12 in all). The trading cards were also made available as a set, separate from the cereal. The cards found in the separate set were printed on both sides, unlike the cut-out versions.


Click here to see all cereals from Independent / Undefined.
This cereal belongs to the following Mr Breakfast Cereal Families:
Xena: A Taste of Honey Cereal Theater 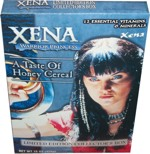 click to enlarge
Xena Cereal Sell Sheet And Box Back

Submitter: Mr Breakfast
Uploaded: 5/20/2008
Additional details
Upload an image for this cereal
Comments About This Cereal
What do you think of Xena: A Taste of Honey?
By LittleWiseAcre

Best. Show. Ever. Never got to try the cereal.

Get it? The name of this cereal is a euphemism for va-jay-jay. Something any nerd who bought this knows nothing about.