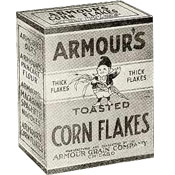 From: Independent / Undefined
Introduced in 1920

This cereal was described in a 1921 ad as "crisp, substantial corn flakes carefully packaged at our modern, sunlit Battle Creek plant". 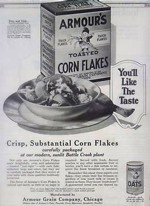 Submitter: Mr Breakfast
Uploaded: 10/1/2008
Additional details
Upload an image for this cereal
Comments About This Cereal
What do you think of Corn Flakes (Armour's)?
There are no comments yet for this cereal. Be the first! Was it good? Was it bad?
Do you have information not included in the article? Let the world know!