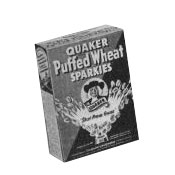 From: Quaker
Introduced in 1940


This cereal also came in a Puffed Rice Sparkies variety.

The most popular slogan for the cereal was "wheat shot from guns", referring to the process used to puff wheat. "Gun puffing" is a high pressure cooking method which causes the grains of wheat to quickly expand or "explode".

Well, according to a 1941 magazine ad, "because (they) give my family a marvelous health bonus every day with (their) 'Vitamin Rain'!"

"Vitamin Rain" was described as "an actual shower of precious, healthful, protecting vitamins B, D and G - added to both Wheat and Rice Sparkies by 'Vitamin Rain'"

"Vitamin rain" was actually a clever way to describ who the cereal pieces were sprinkled with a vitamin solution as they traveled down the conveyor belt.

As for vitamin G, that's what they used to call riboflavin (vitamin B2) back in the day. 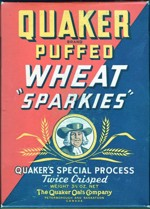 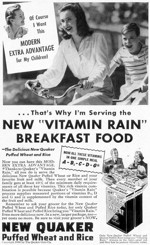 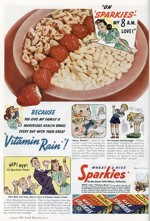 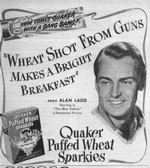 Submitter: radner
Uploaded: 4/29/2008
Additional details
Upload an image for this cereal
Comments About This Cereal
What do you think of Puffed Wheat Sparkies?

I was born in Kent, Ohio, in 1936 and still live here. I grew up with Quaker Puffed Wheat (and rice, too) Sparkies and it was a delicious light and fluffy cereal. As I recall it came in a long cellophane bag, but I could be wrong about that. It sponsored a daytime radio serial in the early 1940s but I don't remember the name of it. Part of the advertisement was "Quaker Puffed Wheat Sparkies, The wheat that's shot from guns, The easy step to extra pep and boy the taste is swell. So here comes Quaker with a bang, bang, rat-a-tat-tat bang, bang." This was followed by the announcer saying, "Hello, gang." which led into the program. If anyone knows the program. my email is kitmyers23@yahoo.com.