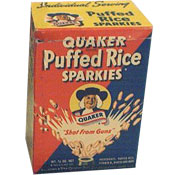 From: Quaker
Introduced in 1940


This cereal also came in a Puffed Wheat Sparkies variety.

The most popular slogan for the cereal was "rice shot from guns", referring to the process used to puff rice. "Gun puffing" is a high pressure cooking method which causes the rice grains to quickly expand or "explode". 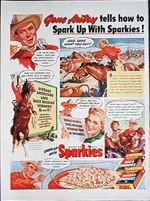 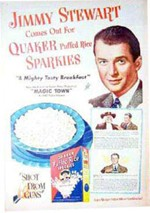 Submitter: radner
Uploaded: 4/29/2008
Additional details
Upload an image for this cereal
Comments About This Cereal
What do you think of Puffed Rice Sparkies?

Almost right on the jingle. I have it on tape. The last line is rat a tat tat, bang bang.

Even though I haven't had it for many decades, I can say without question that it's still my favorite cereal.

I entered a contest, probably in the late 1940's. I had to write a jingle and the first prize was a a grand Lionel train set. There were also 500 pairs of roller skates as prizes which I wanted. I won the first prize. I wrote: Eating Sparkies is fun / cause it's shot from a gun / so to mother I'll say / double my dish today.

I have an old 'Learn To Fly by Captain Sparks' from Sparkies Cereal. Cannot seem to find any more info about it. It says for 2 boxtops a child could have the training cockpit and the instruction book that I have.

Many, many years later, I still consider this my favorite cereal of all time.

It's still my favorite cereal. Never had it it when it was called Sparkies, but Puffed Rice with a little milk and sugar is the best.

The cereal was okay but the theme song was bad.

I found an old jingle for Puffed Rice Sparkies. It's from Thomas Sisi at thoughts.com and he says a couple of the words could be wrong. Anyways...