Seven In The Morning 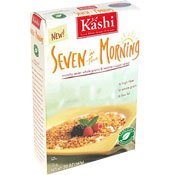 
This cereal was described in 2003 Kashi media kit as "a crunchy nugget cereal containing Kashi's blend of Seven Whole Grains and Sesame." It was considered high-fiber, low fat and a good source of whole grain. According to Kashi, "Its diversity of whole grains provides the pure nourishment of complex carbohydrates, protein and fiber needed for a healthy body and mind."

Upload an image for this cereal
Comments About This Cereal
What do you think of Seven In The Morning?
There are no comments yet for this cereal. Be the first! Was it good? Was it bad?
Do you have information not included in the article? Let the world know!