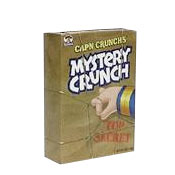 From: Quaker
Introduced in 2000

Mystery Crunch was part of a revisiting of the successful "Where's The Cap'n?" promotion Quaker conducted in 1985. The cereal was described by the company as a "fun, fruity cereal with magical popping sprinkles that make the cereal pop and sizzle in milk."

Spoiler Alert! The Cap'n was in Volcanica saving the Earth's supply of Crunchium. The 1985 campaign hid the Cap'n in the Milky Way.

This is the press release Quaker issued in late 1999 regarding the revisited promotion:

CHICAGO, Nov. 23 /PRNewswire/ -- Cap'n Crunch Cereal's most successful promotion is reappearing -- as the Cap'n disappears -- and it's bigger than ever.

The new "Where's the Cap'n?" campaign will launch when the Cap'n disappears from all cereal boxes. Quaker is putting out a shared $1 million reward for the location of his whereabouts.

The highly integrated "Where's the Cap'n?" promotion includes three waves of excitement spread over six months. It kicks-off with three different "missing Cap'n" cereal boxes that each provide unique clues. Inside each box, an interactive clue decoder will help kids decipher the clues. Additionally, kids will be introduced to the first-ever Cap'n Crunch web site, another fun, interactive component where kids can use the decoder.

Wave II of the promotion allows kid sleuths to interactively experience the Cap'n's adventure by playing the Cap'n Crunch CD-Rom game, Cap'n Crunch's Crunchling Adventure(TM), which will be available FREE inside specially marked double-packs of Cap'n Crunch cereals upon the Cap'n's return. Through this promotion, the CD-Rom, which is retail valued at $30 and features the Cap'n himself, will become one of the most widely distributed full-length CD-Rom games nationwide.

Wave III features the Cap'n's biggest discovery from his journey -- Cap'n Crunch's "Mystery Crunch." Mystery Crunch is a fun, fruity cereal with magical popping sprinkles that make the cereal pop and sizzle in milk. The actual name of this limited-time only cereal -- later to be revealed -- will integrate with the place the Cap'n actually visited.

"Cap'n Crunch has always known kids and their desire for fun and adventure," says Todd Magazine, Vice President, Product Management and Marketing of Ready-To-Eat cereals, Quaker Oats Company. "With interactive components such as the decoder, web site and a CD-Rom game, Where's the Cap'n? is one of the biggest promotions ever for Quaker cereals."

The promotion will feature an integrated television and print advertising campaign, including three national FSIs.

Click here to see all cereals from Quaker.
This cereal belongs to the following Mr Breakfast Cereal Families:
Upload an image for this cereal
Comments About This Cereal
What do you think of Mystery Crunch (Cap'n Crunch)?

Pretty fun. Don't remember it, but I like the idea.

My name is Willie and I represent VA and I'm 17 years old.