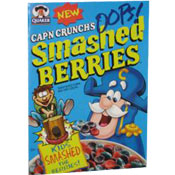 From: Quaker
Introduced in 2001


This cereal was criticized by a consumer advocacy group, The Center for Science in the Public Interest, in a 2003 report about marketing and advertising aimed at children.

The group inferred that Smashed Berries cereal encouraged kids to overeat because an ad in Nickelodeon magazine read, "Kids smashed 'em in the factory so you can fit more in your mouth." They also took a jab at the cereal, pointing out that Smashed Berries contained no real berries. Unfortunately, the 2003 report came out more than a year after Quaker stopped making the limited edition cereal. 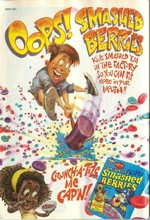 Submitter: leprican_katie
Uploaded: 10/16/2008
Additional details
Upload an image for this cereal
Comments About This Cereal
What do you think of Smashed Berries (Cap'n Crunch)?
By Bucksky11

It looks basically like a berry flavored Quisp. I wish I could have tried some.