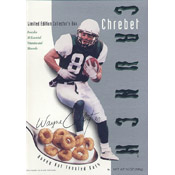 Wayne Chrebet was a wide receiver for the New York Jets from 1995 to 2005. Boxes of the cereal can sometimes be found on sports memorabilia websites.

If you have information as to who made this cereal and if it actually contained cereal, please post a comment below.

Upload an image for this cereal
Comments About This Cereal
What do you think of Chrebet Crunch?
By Collectable?

I have an unopened box. Is there a value as a collectable?