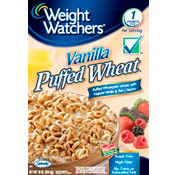 From: Weight Watchers
Introduced in 2005


The complete name of this cereal was Vanilla Puffed Wheat with Almonds. In addition to the vanilla, the cereal also had a mixed berry flavor component. It was potpourri of flavors and textures. The puffed wheat had a mild crunch while the almonds provided a dramatic counter-punch power-crunch. The cereal was sweetened with Splenda.

Company Description: As described on its website, Weight Watchers International, Inc. is "the world's leading provider of weight management services, operating globally through a network of Company-owned and franchise operations... Read on and see all cereals from Weight Watchers

Upload an image for this cereal
Comments About This Cereal
What do you think of Vanilla Puffed Wheat?
By ronnie

Where can I buy this? I'd love to try it. I've had other Weight Watchers products that I've loved like snack cakes, so I bet the cereal is good too.