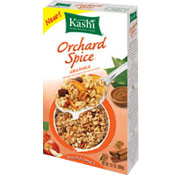 From: Kashi
Introduced in 2007


Around 2008, the name of this cereal was changed to Apple Orchard Granola.

When Orchard Spice Granola was originally announced by Kashi in a press release in May of 2007, they described it like this:

"Kashi Company, the premier natural food company, today announced the introduction of Kashi Granola, a cereal that features an all-natural blend of delicious fruits, nuts and seven whole grains. While Kashi has developed a comprehensive family of all-natural foods including cereal, bars, crackers and whole grain cookies, this is Kashi's first granola cereal...

Upload an image for this cereal
Comments About This Cereal
What do you think of Orchard Spice Granola?
There are no comments yet for this cereal. Be the first! Was it good? Was it bad?
Do you have information not included in the article? Let the world know!