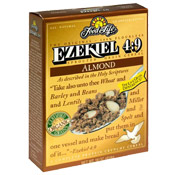 From: Food For Life


This cereal is described on the front of one box as "a complete protein cereal" and on another box as ""a complete protein crunchy cereal." As the name implies, this cereal features slices of almonds. Additional cereal box text reads, "all natural... 100% flourless... sprouted grain cereal... (with) no preservatives."

As of 2011, there were four Ezekiel 4:9 cereals available: Original, Golden Flax, Cinnamon Raisin and this variety.

Company Description: The Food for Life Baking Company is a family-owned and operated bakery specializing in natural foods. The company began operations in the back of a small natural foods store called... Read on and see all cereals from Food For Life

Upload an image for this cereal
Comments About This Cereal
What do you think of Ezekiel 4:9 Almond?

I love Ezekiel bread; it's the only kind I buy. I also like healthy cereal, especially Uncle Sam. This cereal, however, is awful. If, like Buffalo Bill from 'The Silence of the Lambs', I was going to keep someone in a pit in my basement, this is what I would feed them.

I stopped eating cereal as soon as I was old enough to cook eggs for myself and have called cereal "soggy dusties" ever since. However, when my doctor advised a 2g sodium diet, I suddenly became aware of some bad eating habits, one being sodium and fat-laden breakfasts. A trip to the health food store jump-started me on my new learning expedition and one of the things I tried was Ezekiel 4:9 Almond Cereal. Wow! I have this every morning w/blueberries, blackberries and raspberries (and a little Silk Almond Milk) and I'm now hooked! Now if I'm forced to eat breakfast at a restaurant, I miss my cereal and the whole day just starts out off-balance for me. If you hate cereal, try this one. It's not low in sodium, but much lower than eggs, bacon, etc. and with fruit, it's incredible.