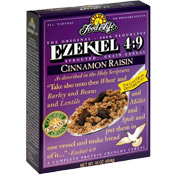 From: Food For Life


This cereal is described on the front of the box as "a complete protein crunchy cereal" and additionally as an "all natural... 100% flourless... sprouted whole grain cereal... (with) no preservatives."

As of 2011, there were four Ezekiel 4:9 cereals available: Original, Golden Flax, Almond and this one.

The company's website described Cinnamon Raisin Ezekiel 4:9 like this: "Just like our Original Ezekiel 4:9 Cereal with organic raisins and cinnamon. Makes an excellent cereal, hot or cold."

Company Description: The Food for Life Baking Company is a family-owned and operated bakery specializing in natural foods. The company began operations in the back of a small natural foods store called... Read on and see all cereals from Food For Life 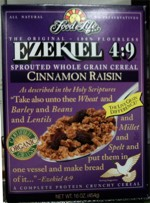 Submitter: Mr Breakfast
Uploaded: 1/8/2011
Additional details
Upload an image for this cereal
Comments About This Cereal
What do you think of Ezekiel 4:9 Cinnamon Raisin?
There are no comments yet for this cereal. Be the first! Was it good? Was it bad?
Do you have information not included in the article? Let the world know!