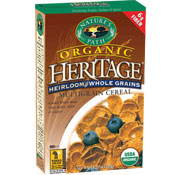 
To interpret one cereal box, it would appear that the complete name of this cereal was Nature's Path Organic Heritage Heirloom Whole Grains Ancient Grain Cereal.

A different version of the box called it Nature's Path Organic Heritage Multigrain Cereal and said that it was made "from the ancient grains spelt, quinoa & kamut... no chemical pesticides... no additives or preservatives... nothing artificial... a good source of fiber."

Upload an image for this cereal
Comments About This Cereal
What do you think of Heritage Multigrain?
There are no comments yet for this cereal. Be the first! Was it good? Was it bad?
Do you have information not included in the article? Let the world know!