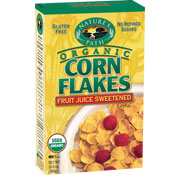 
This cereal was described on the box as a "lightly sweetened flakes of organic corn cereal." Other text on the box declares, "gluten-free... low fat... 0g trans fat... fruit juice sweetened."

At this writing, the ingredients in the cereal were organic corn meal, organic grape and/or pear juice concentrate and sea salt.

Upload an image for this cereal
Comments About This Cereal
What do you think of Corn Flakes (Nature's Path)?
There are no comments yet for this cereal. Be the first! Was it good? Was it bad?
Do you have information not included in the article? Let the world know!