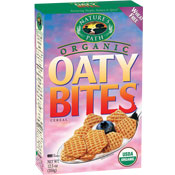 
This organic cereal had diamond-shaped pieces with a cross-hatched pattern reminiscent of Kellogg's Crispix cereal. The box described Oaty Bites as a "crispy whole grain cereal."

Upload an image for this cereal
Comments About This Cereal
What do you think of Oaty Bites?
There are no comments yet for this cereal. Be the first! Was it good? Was it bad?
Do you have information not included in the article? Let the world know!