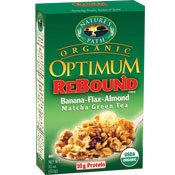 
This cereal appears to have been repackaged and renamed as Banana Almond Optimum. Both cereals contained banana, flax, almond and matcha green tea. Both listed oats are their first ingredient and both were sweetened with evaporated cane juice.

Upload an image for this cereal
Comments About This Cereal
What do you think of Optimum Rebound?
There are no comments yet for this cereal. Be the first! Was it good? Was it bad?
Do you have information not included in the article? Let the world know!