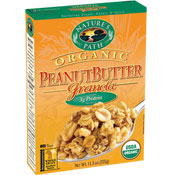 
This organic granola features both peanut butter and roasted peanuts. Additional sweetness is provided from evaporated cane juice and molasses. Each serving provides 7 grams of protein, according to the package.

In March of 2009, this granola was voluntarily recalled along with several other Nature's Path products because they were made using peanuts that had been recalled by Peanut Corporation of American due to a Salmonella contamination risk. The recall ended with no reports of illness.

Upload an image for this cereal
Comments About This Cereal
What do you think of Peanut Butter Granola?
There are no comments yet for this cereal. Be the first! Was it good? Was it bad?
Do you have information not included in the article? Let the world know!