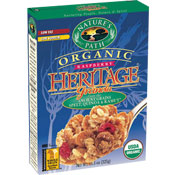 
The box for this cereal noted the following attributes: "low fat... from the ancient grains spelt, quinoa & kamut... certified organic." Despite being called a granola, this cereal was more of a flake cereal with scattered oats or oat clusters. Real pieces of raspberry gave this cereal some real "rasp"-a-matazz.

This cereal appears to have been discontinued and no longer appears on Nature's Path's website (as of 2011).

Upload an image for this cereal
Comments About This Cereal
What do you think of Raspberry Heritage Granola?
There are no comments yet for this cereal. Be the first! Was it good? Was it bad?
Do you have information not included in the article? Let the world know!