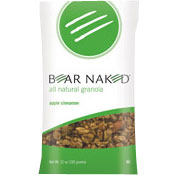 Company Description: This company was founded in 2002 by Brendan Synnott and Kelly Flatley as a natural and organic food company. In 2007, it was sold to Kellogg's Kashi division. The company has said that the name "Bear Naked" reflects their "passion and dedication to using ingredients that are all-natural and 'bearly' processed.... Read on and see all cereals from Bear Naked

Upload an image for this cereal
Comments About This Cereal
What do you think of Apple Cinnamon Granola?
There are no comments yet for this cereal. Be the first! Was it good? Was it bad?
Do you have information not included in the article? Let the world know!