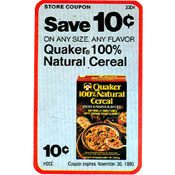 From: Quaker
Introduced in 1972


This cereal was available in at least three varieties: Quaker 100% Natural Cereal With Raisin & Date, another that spotlighted honey and another that featured cinnamon.

"The natural snack that tastes as good as an oatmeal cookie.

"What a terrific way to change your children's snacking habits. No artificial colors, flavors or preservatives. Just a mixture of 9 fresh fruits, nuts and grains sweetened with honey and brown sugar and toasted in a warm Quaker oven. The No. 1 natural cereal.

A 1985 television commercial said, "The typical cereal is a monotone of flakes. But Quaker 100% Natural is a whole symphony of taste."

In a 1989 TV commercial, actor Ed Begley, Jr. described the cereal like this:

"My mouth has a terrible time waking up in the morning. You know why? Most cereals bore it to sleep. But not Quaker Natural Cereal. My mouth gets a charge of whole grains, honey, almonds, raisins... a bunch of different textures... a blast of different tastes. That's reveille, man. My mouth will never get back to sleep. Once you taste Quaker Natural, everything else is just corn flakes."

Now Showing: 1985 Ad Block w/ 100% Natural
Upload an image for this cereal
Comments About This Cereal
What do you think of 100% Natural?

Wasn't there a version of this in the 1970s or early 80s that contained cashews and dates?

I used it for the crust on my cheese cake! Haven't found another granola cereal that even comes close! Bring it back!

I really, really wish they would bring back 100% Natural Cereal. Nothing is even a close second to it. Nothing! Please bring it back!

The original product is widely available in Canada as Quaker Harvest Crunch - in original and light versions. It is often on sale for $2.00 at stores like No Frills. It is on sale now at RCSS for $2.50. It is the same thing that was sold in the US in 1972 and is very popular. I don't see it in US stores but I do see a newer product called "granola" by Quaker. PepsiCo owns the Quaker line. They have a marketing plan in Canada that is different.

This cereal was reborn as Quaker Harvest Crunch. Sans dates.

The best. The Simply Granola they have out now is really close. I'd like to see the ingredients and how they compare!

Please share all the posted positive comments on your site as a petition to Quaker - to please return this product to consumers delight. Nothing else compares to 100% Natural Oats, honey & raisins. So many millennials have never eaten a big mac due to smarter diets, this cereal ranks as a very worthy product.

My favorite cereal when I was able to find it! Please bring it back!

Best cereal around. Wish they hadn't discontinued the original formula!