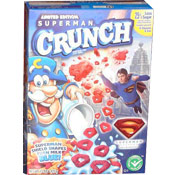 From: Quaker
Introduced in 2006


This limited edition cereal was described on the box as a "sweetened corn & oat cereal - Superman shield shapes turn blue in milk". This cereal was released as a tie-in for the 2006 film Superman Returns starring Brandon Routh, Kate Bosworth and Kevin Spacey.

Company Description: The Quaker Oats Company was founded in 1901 with the merger of three oat milling operations in the Mid-Western United States. Since then, the company has expanded operations to include a number of grocery sectors. In addition to hot and cold breakfast cereals, their products include... Read on and see all cereals from Quaker
This cereal belongs to the following Mr Breakfast Cereal Families:
Superman Crunch (Cap'n Crunch) Cereal Theater

This one turned the milk blue. I loved that!