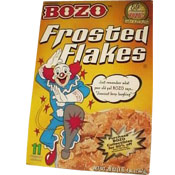 Company Description: Larry Harmon, whose real name was Lawrence Weiss, played Bozo the Clown on a children's show which originated in on KTLA-TV in Los Angeles in 1959. Harmon purchased the rights to the clown and aggressively marketed the Bozo persona, and in so doing, he made Bozo the world's most famous... Read on and see all cereals from Larry Harmon's
This cereal belongs to the following Mr Breakfast Cereal Families:
Additional Images

Submitter: Mr Breakfast
Uploaded: 3/18/2008
Additional details
Upload an image for this cereal
Comments About This Cereal
What do you think of Bozo Frosted Flakes?
By Andrew F.

I never knew that Bozo had his own cereal. Cool.