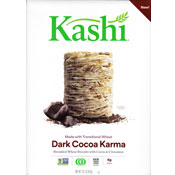 From: Kashi
Introduced in 2016


This cereal is described on the front of the box as "shredded wheat biscuits with cocoa & cinnamon (that is) made with transitional wheat." While the box gives the impression that the biscuit pieces might be quite large, they are actually the size of Kellogg's Mini Wheats cereal pieces.

Short Product Review From Mr Breakfast: Dark Cocoa Karma a very enjoyable cereal. It doesn't necessarily taste healthy despite the simple, healthy ingredients. The chocolate flavor is fairly strong (especially when eaten dry) and the intermingling of the chocolate with a hint of cinnamon is delightful. Like the best chocolate cereals, you end up with some tasty chocolate milk at the bottom of each bowl. I recommend you give this one a try if the price is right. 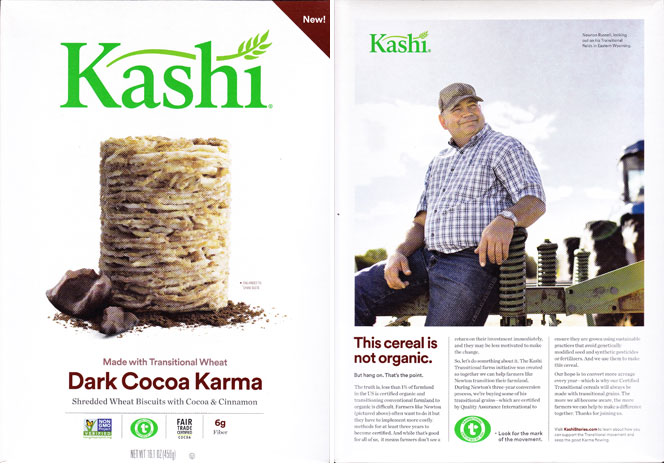 The back of the introductory box makes a bold, surprising claim: "This cereal is not organic. But hang on. That's the point."

It goes on to explain that "less than 1% of farmland in the US is certified organic and transitioning conventional farmland to organic is difficult." It takes time and money to become certified which creates temporary economic hardships for farmers trying to do the right thing. To help transitioning farmers and encourage other farmers to go organic, terms like "transitional wheat" and "transitional farm" have emerged to explain that they are heading in the right direction.


Click here to see all cereals from Kashi.
This cereal belongs to the following Mr Breakfast Cereal Families:
Upload an image for this cereal
Comments About This Cereal
What do you think of Dark Cocoa Karma?

I really enjoyed this cereal as it was tasty and deliciously chocolaty.

This was a decent cereal. You may be disappointed though if you like chocolate and you're looking for a chocolate taste. They use Cinnamon in the shredded wheat, so the cinnamon overpowers the taste of the chocolate in the center. I think you taste more cinnamon than chocolate, which is a shame. I think this would've been better without the cinnamon at all.