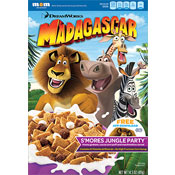 From: MOM Brands
Introduced in 2015


This cereal is described on the box as a "honey graham, cocoa corn puff and marshmallow cereal." According to the Mom Brands website, it "combines squares of honey graham with a chocolatey crunch and marshmallows... each flavorful bowl serves up a party of great taste that you can enjoy for breakfast or snack anytime!" From a visual perspective, the cereal looks like Golden Grahams mixed with Cocoa Puffs and marshmallow-shaped marshmallows.

Madagascar S'Mores Jungle Party Cereal began appearing in stores in the summer of 2015. Here’s how the box looked in January 2016: 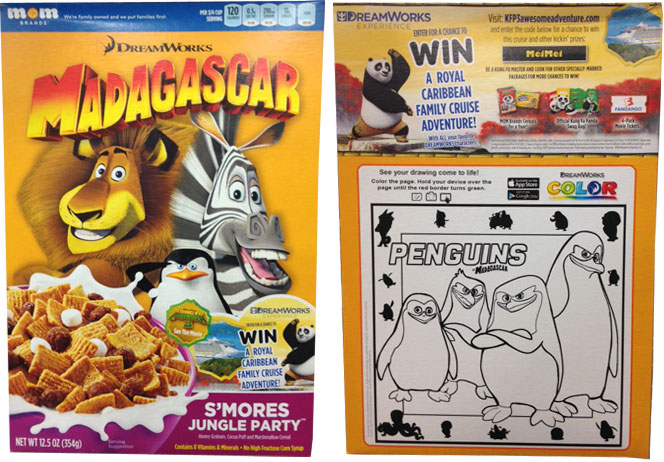 The animated film Madagascar from DreamWorks debuted in May 2005. That film produced 2 sequels: Madagascar: Escape 2 Africa (2008) and Madagascar 3: Europe's Most Wanted (2013). A spin-off called Penguins of Madagascar was released in 2014.

Now Showing: Madagascar Movie Trailer
Upload an image for this cereal
Comments About This Cereal
What do you think of Madagascar S'Mores Jungle Party?

It's basically just Golden Grahams and Cocoa Puffs with marshmallows in it. As simple as it sounds, it's a very good tasting cereal. Not really an original idea, but it works. I think it tastes more like a S'more than the Smorz cereal does.