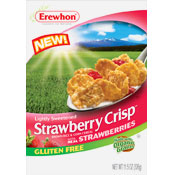 From: Erewhon
Introduced in 2009


This cereal has been described on the package as a "lightly sweetened brown rice & corn cereal with real strawberries" that is "gluten free" and "made with organic grains."

This cereal was introduced in May of 2009 at the same time as Erewhon's Cocoa Crispy Brown Rice cereal.

Upload an image for this cereal
Comments About This Cereal
What do you think of Strawberry Crisp?
There are no comments yet for this cereal. Be the first! Was it good? Was it bad?
Do you have information not included in the article? Let the world know!