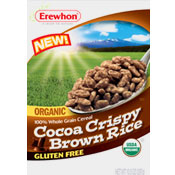 From: Erewhon
Introduced in 2009


This organic cereal has been described on the box as being a "100% whole grain cereal" that's "gluten free."

The cereal was introduced in May of 2009 - the same time as Erewhon's Strawberry Crisp cereal.

Company Description: Erewhon is a brand of U.S. Mills. The Erewhon company was actually founded in 1966 ("by two macrobiotic educators" according to U.S. Mills' website). In 1986, it was Erewhon that acquired U.S. Mills... Read on and see all cereals from Erewhon
This cereal belongs to the following Mr Breakfast Cereal Families:
Upload an image for this cereal
Comments About This Cereal
What do you think of Cocoa Crispy Brown Rice?
There are no comments yet for this cereal. Be the first! Was it good? Was it bad?
Do you have information not included in the article? Let the world know!