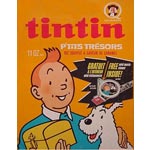 
A French cereal based on the character Tintin, a young reporter and his faithful dog, Snowy.

This cereal is included in our database of U.S. cereals because 1) it has mistakenly been shown of other lists of U.S cereals and 2) because it's pretty cool.

Submitter: jeffrey
Uploaded: 10/14/2010
Additional details
Upload an image for this cereal
Comments About This Cereal
What do you think of Tintin?

This was my favorite cereal when I was growing up in West Quebec in the Sixties and Seventies. The cover box is definitely from Canada as the weight of it is given in ounces (Canada was still using the imperial system in the Sixties, France wasn't).

I loved this cereal as a kid. It definitely had a unique flavor. Would love to taste the same recipe, maybe with an updated marketing angle. - Tom

Cheerios nuts and honey is close but no cigar.

I agree... I will be glad to see them back... I'm fifty... and I remember that taste like it was yesterday. With all the TINTIN phenomenon... I don't understand why Quaker hasn't thought about the possibility to sell this cereal again.

I remember when I was a kid, I expected my mother to come back to unpack the grocery bags, speed, hoping to discover a Tintin cereal box. The taste was unique. A real treat. And, I do not know why, one day it disappeared.

Tintin cereal was awesome. Is there any chance they'll bring it to the USA now that there's a big Tintin movie on the way?