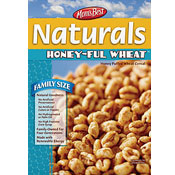 From: Mom's Best Naturals
Introduced in 2008


This product was described on the box as a "honey puffed wheat cereal." It was similar in taste and texture to Post Golden Crisp and Post Rice Krinkles cereals.

Company Description: According to the company's website, the Mom's Best company has been owned by the same family for four generations. As of 2011, the only products produced by the company were hot and cold breakfast cereals.... Read on and see all cereals from Mom's Best Naturals

Upload an image for this cereal
Comments About This Cereal
What do you think of Honey-ful Wheat?
There are no comments yet for this cereal. Be the first! Was it good? Was it bad?
Do you have information not included in the article? Let the world know!