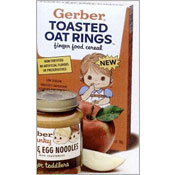 From: Independent / Undefined
Introduced in 1987


Gerber Toasted Oat Rings were developed specifically as a finger food for toddlers. Unfortunately, some toddlers had trouble swallowing the rings and the cereal was recalled about 2 years after its introduction.

A magazine advertisement from January 1987 introduced the cereal like this:

An article in The Los Angeles Times in August 1989 described the cereal's recall:

"Gerber Products Co. today recalled some shipments of Toasted Oat Rings because a new manufacturing process made the cereal too hard for some children to swallow.

"'The Food and Drug Administration has been notified . . . and removal of the product from retail store and wholesale grocer warehouses is under way,' said Ron Lovasz, vice president of quality control for Gerber.

"Some parents reported that their children had trouble swallowing the rings, so the company voluntarily recalled 7-ounce packages of the cereal with "Better If Used By" codes of 30MAY90 through 15AUG90, Gerber said in a news release."

This product was produced by the Gerber Products Company of Fremont, MI. It appears under the "Independent / Undefined" manufacturer listing because a company must have at least three ready-to-eat dry cereals in our database before a new company listing is created.


Company Description: The company classification of "Independent / Undefined" is a catch-all for several cereals in our database. This category includes 1) cereals from smaller companies with a near-national distribution; 2) cereals whose manufacturer we've been unable to determine; and 3)... Read on and see all cereals from Independent / Undefined 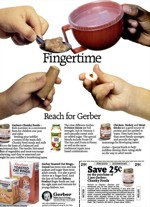 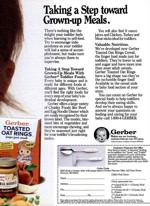 Submitter: Mr Breakfast
Uploaded: 10/26/2010
Additional details
Upload an image for this cereal
Comments About This Cereal
What do you think of Gerber Toasted Oat Rings?
By Lionhearted

Some families with toddlers served this as a cereal. That could've been the best thing to do with it.