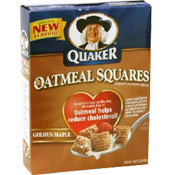 
When it was introduced in 2009, this product was described on the box as a "crunchy oatmeal cereal... naturally & artificially flavored."

In 2010, QuakerOats.com gave the following description of the cereal:

"Do you ever have trouble getting out of bed in the morning? If so, you've probably never tried Quaker Golden Maple Oatmeal Squares. With rich golden maple flavor packed into every bite, you might just find yourself waking up early. Baked with whole grain Quaker Oats, this deliciously crunchy cereal is a heart healthy way to power up for the day ahead."

Upload an image for this cereal
Comments About This Cereal
What do you think of Oatmeal Squares - Golden Maple?

This is the best tasting cereal with 5 grams of dietary fiber I have ever eaten. Add some fruit, and it's a meal!

I absolutely love this cereal. Very light, healthy, lightly sweetened, and simply delicioso. I've been a huge fan of healthy cereals since I first had a taste of Total at age 11. Sugary cereals are just disgusting.

Wonderful cereal, and perfect snack food. I am only finding it in super Walmarts, and buy it out every time I go. Some boxes do seem to have less maple flavor tough. Maybe how long they have been on the shelf?

I love this cereal but it is hard to find where I live. Just when I have a cereal that I like to eat dry or with milk, the stores stop carrying it. I now am forced to buy it on line by the case. It really is that good.