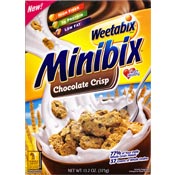 From: Weetabix
Introduced in 2010


This back of the cereal box in March of 2010 described this cereal like this:

"Nourish your body with the benefits of 37 grams of whole grains per serving (that is 77% of your daily whole grain needs!). Reward your taste buds for making a good choice." 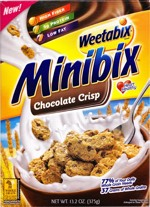 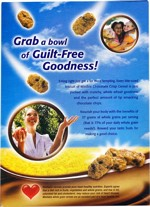 Submitter: Mr Breakfast
Uploaded: 4/20/2010
Additional details
Upload an image for this cereal
Comments About This Cereal
What do you think of Minibix Chocolate Crisp?
There are no comments yet for this cereal. Be the first! Was it good? Was it bad?
Do you have information not included in the article? Let the world know!