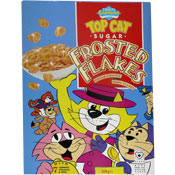 
While this cereal appears to have only been available in U.K., the Top Cat character was very popular in the U.S. during the early 1960's. A Hanna-Barbera animated television series titled "Top Cat" ran on the ABC network in 1961 and 1962. Incidentally, the series was co-sponsored by Kellogg's. The cartoon cat also acted as a commercial spokesman for Kellogg's Corn Flakes in the early 60's.

Now forget all about the 60's, this cereal is from the early 90's. The "Best Before" date on the box we found is September 1993. The cereal's complete name is "Top Cat Sugar Frosted Flakes". It's described as "sugar coated corn flakes" and branded with a "Tesco Cartoon Club" logo.

Company Description: The company classification of "Independent / Undefined" is a catch-all for several cereals in our database. This category includes 1) cereals from smaller companies with a near-national distribution; 2) cereals whose manufacturer we've been unable to determine; and 3)... Read on and see all cereals from Independent / Undefined
This cereal belongs to the following Mr Breakfast Cereal Families:
Additional Images 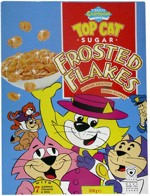 Submitter: Mr Breakfast
Uploaded: 10/8/2009
Additional details
Upload an image for this cereal
Comments About This Cereal
What do you think of Top Cat Frosted Flakes?
By maison

It's interesting that this would be a UK product where the show "Top Cat" was known as "Boss Cat".